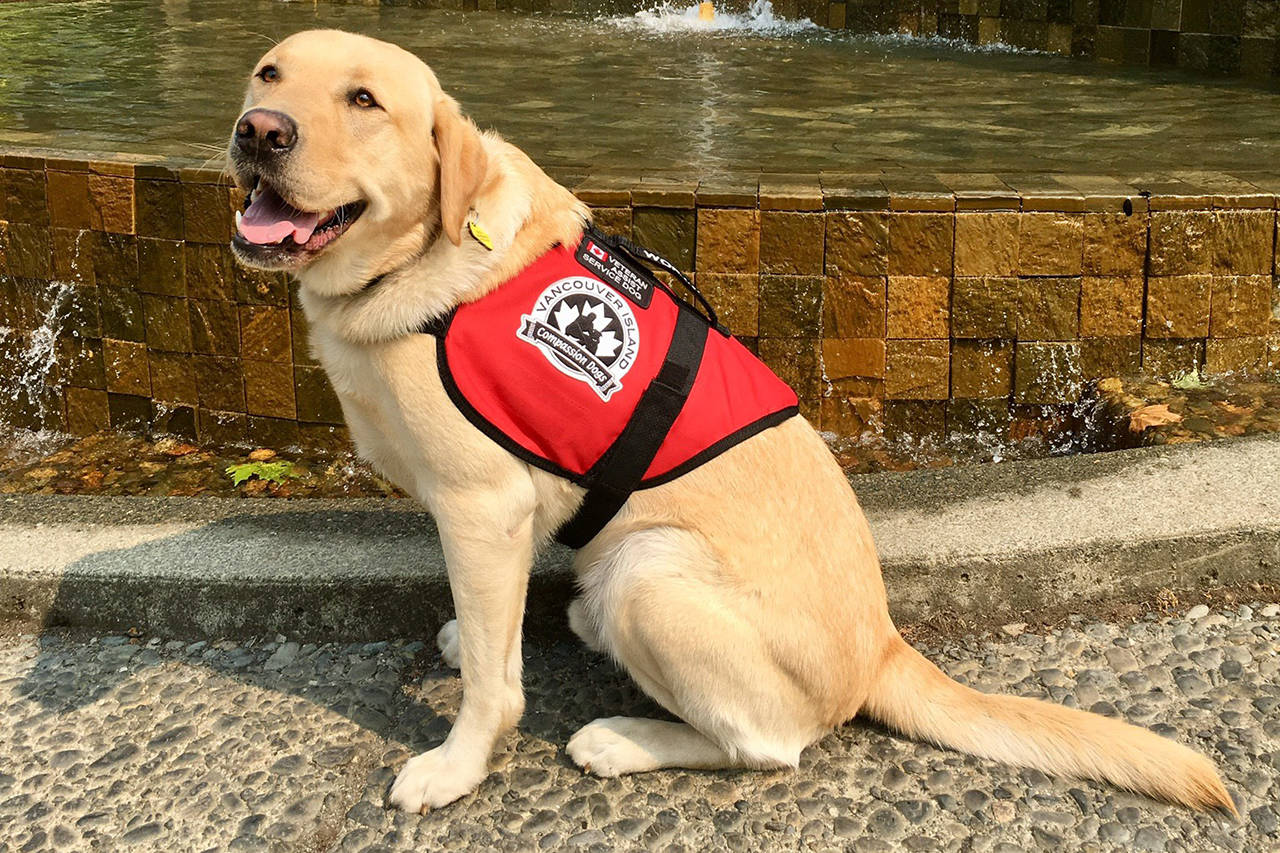 Here are some really feel good stories about some great pups that were there for their owners. Remember, service dogs should never be distracted. Although they are very friendly, petting service dogs distracts the animals from doing their jobs to protect their owners.

Take a moment a read these awesome encounters by a fellow animal enthusiast with Mental Floss, Tony Dunnell.

Dogs have been helping humans in one way or another since domestication began some 15,000 years ago. The earliest evidence of a service dog may be a mural in the ruins of Roman Herculaneum, buried under volcanic ash when Mount Vesuvius erupted in 79 CE, which seems to depict a dog leading a blind man.

The first concerted effort to train dogs for the blind began around 1780 at the Les Quinze-Vingts hospital in Paris. Forty years later, Johann Wilhelm Klein, the founder of the Institute for the Education of the Blind in Vienna, documented his methods for training some of the first seeing-eye dogs. But the modern use of guide dogs began with Dr. Gerhard Stalling, a German doctor during World War I.

While visiting a veteran’s hospital, which at the time was treating soldiers blinded by poison gas on the Western Front, Stalling left his German Shepherd with one of his patients. When he returned, he witnessed an intriguing scene: His dog appeared to be guiding the veteran around the hospital grounds. Inspired, the doctor began training German Shepherds to serve as guides. In 1916, he opened the world’s first ever guide dog school in Oldenburg, Germany.

Since then, service dogs have helped thousands of people with various health conditions. All these dogs can be hailed as life-savers, but some have gone the extra mile, literally saving their owners’ lives in moments of peril.

In December 2013, blind 60-year-old Cecil Williams was navigating the New York City Subway with his guide dog Orlando. When Williams fainted and began to tumble off the platform, Orlando tried to keep the man from falling. But Williams fell onto the tracks below. The dog jumped down, trying to get him to move away from danger as an express train approached. The train operator slammed on his brakes, but it was too late: One and a half cars passed over Williams and Orlando as they lay in the middle of the tracks. Somehow, the lucky duo walked away unscathed, apart from a cut on Williams’s head. “The dog saved my life,” he said later, but that wasn’t the end of the story. The 11-year-old Labrador was about to retire, and Williams’s health insurance would not cover the cost of a non-working dog. Following media coverage, anonymous donors raised enough money to allow Orlando to stay with his owner, who also received a new guide dog.

When Lesley Hailwood, 61, started choking on a chocolate at her home in Liverpool, England, there was no other human there to help her. Luckily for Hailwood, she was looking after Nell, a trainee guide dog who was staying at her home while training at a nearby guide dog center. Nell, a cross between a German Shepherd and a Golden Retriever, had almost completed her training, which can take between 17 and 20 months. Despite being a novice, Nell knew something was wrong. The clever canine jumped up onto the sofa, stood up on her back legs, and thrust her two front paws into Hailwood’s chest, dislodging the chocolate.

Salty was one of two guide dogs awarded for their bravery and decisiveness during the September 11, 2001, attacks on the World Trade Center. In the moments before the attack, the yellow Labrador was sleeping under the desk of his blind owner, Omar Rivera, on the 71st floor of Tower One. After an explosion sent the building swaying, Salty led Omar through the smoke and fumes and confusion, down the stairs and through the lobby, before running through the chaos outside until they reached safety. The descent took Rivera and Salty an exhausting one hour and 15 minutes, but they both made it out alive, together through it all.

At the same time Salty was guiding Rivera down through Tower One, Roselle the Labrador Retriever was leading her blind owner, Michael Hingson, down from floor 78. They set off through the smoke, and as they descended, with Roselle leading the way, more people began to follow her. Kerosene fumes burned their eyes, but Roselle never faltered as she steered the group down. Apart from a quick stop to greet firemen, Roselle forged on with calm resolve, leading her owner to the street below—along with the 30 people who had followed this incredible dog down 1463 steps to safety.

When Figo the service dog saw a school bus about to hit his blind owner, his reaction wasn’t exactly subtle. The Golden Retriever charged straight at it, flinging his body at the oncoming bus in a valiant attempt to take the blow. The bus hit both him and his owner, Audrey Stone, fracturing her elbow, ribs, and ankle and leaving Figo with a leg cut to the bone. Thankfully, both survived the ordeal. After the incident in Brewster, New York, Police Chief Del Gardo said, “The dog took a lot of the blow. And he did not want to leave her side. He stood right with her. He was there to save her.”

In 2013, a yellow Labrador named O’Neil was out with his trainers in the streets of San Rafael, California. Despite still being in his student years, O’Neil’s reactions were quick enough to save his two handlers from imminent disaster. He was the first to react as a car careened in reverse down the sidewalk, straight at the group. His concerned glance backwards alerted his trainers, and all three narrowly escaped the onrushing vehicle. It was all caught on a surveillance camera. No one was hurt.

Not all dogs have the skill set, or the size, to be a seeing-eye guide dog. Such was the case with Belle, a 17-pound beagle whose talents were used in other ways. Belle was trained to detect abnormalities in a human’s blood sugar levels, and was paired with her owner, Kevin Weaver, to help him avoid diabetic seizures. By licking her owner’s nose, Belle could take her own reading of Weaver’s blood-sugar level. If the reading seemed off, she would whine and paw at him to let him know. But her talents didn’t stop there. In 2006, Weaver had a seizure and collapsed. Belle had been trained for this very situation: She found her owner’s cellphone and bit down on the number nine, just as she’d been taught to do, which dialed emergency services.

On July 7, 2005, Mike Townsend and his faithful four-legged friend Tom were walking close to London’s Tavistock Square when an explosion rattled through the air. Townsend, who is blind, didn’t know exactly what was going on, and was surprised when Tom began to take him on a different route to his intended destination. When people began rushing past and sirens started ringing out around him, Townsend knew something was wrong. But Tom calmly guided his owner away from the situation, finding alternative routes each time he came across a road shut down by the police. It was only later that Townsend knew the full extent of the July 7 bombings, and realized Tom had led him away from danger. He paid tribute to his loveable guide dog when he spoke to the BBC: “He’s usually pretty daft actually—he rips up blankets and we all think he’s a bit dumb normally—but he isn’t!”

Saving your owner once is something to be proud of, but Yolanda the Golden Retriever has saved her owner on no less than three occasions. In 2013, Yolanda’s blind owner, Christina Colon, heard intruders break into her house. Yolanda sprang into action, pulling her owner’s bedroom door shut to protect her from the burglars before rushing downstairs to confront the thieves, who quickly scurried away at the sight of the growling dog. When Colon called the police, they told her an officer had already been dispatched: Yolanda had already called the emergency services using a specialized phone. Yolanda called the police on two more occasions in the following years, once when Colon collapsed and once when a fire broke out in her home.

Eve was never certified as a service dog—some dogs are just naturals when it comes to saving their owners. In 1991, 41-year-old Kathie Vaughn, who was paralyzed from the waist down, was driving her van in Franklin, Indiana. With her was Eve, her 6-year-old Rottweiler, who had never received any training as a service dog. But when the van caught fire along Interstate 65, Eve had no intention of letting her owner succumb to the flames. Vaughn struggled to assemble the parts of her wheelchair, but the smoke soon overwhelmed her. Eve then grabbed her owner, pulled her out of the van, and dragged her to a drainage ditch about 20 feet from the vehicle. Shortly afterward, the van was engulfed in flames. When a policeman arrived, Eve continued to protect her owner, insisting on accompanying her to the trooper’s car.

Dogs don’t only help humans—sometimes, they help other dogs, too. Stumpy the Labrador has helped save the lives of up to 120 other dogs through his blood donations. Stumpy was originally bred to be a guide dog, but was retired from the program because he was born with deformed legs. But that doesn’t mean he said goodbye to public service. Stumpy has a negative blood type, so his blood can be given to any dog in an emergency. In 2020, the 9-year-old white Labrador became the highest donating dog to the United Kingdom’s Pet Blood Bank, after giving his 30th and final donation before retiring. 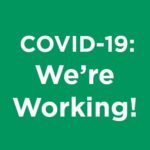